We descend into an underworld realm that is…Bretonside Bus Station and we (Ruth and Derek) meet for coffee in The Waiting Room Café.

“It’s just like Brief Encounter”. There is an air of another time about this sad, run down establishment…the 1980’s. The chill counter holds cabbages and cauliflowers wrapped in Clingfilm.  A selection of snacks displayed forlornly on the back shelf (Golden Wonder Cheese & Onion crisps & Mars Bars). A very tired looking selection of sweaty, unappealing cakes, sit mournfully beneath clear plastic covers on top of the counter. There is nothing appetising about the food.

There is a smell of egg, but that could well be John who wandered in with his walking stick. He is probably late 50’s and does not take care of his appearance. He comes here because he can have a cheap dinner and have a chat and flirt with the woman behind the counter…who really isn’t that interested but it fulfils some sort of need and desire in him for human contact.

We decide to go to the 5th Bus stop on Royal Parade (outside Debenhams). 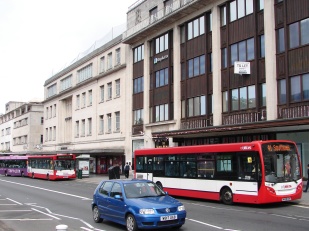 The young woman sat in front of us is looking through her job search. She has caught the bus from outside the Job Centre. The job vacancies are for Care Workers, she looks in need of some care herself.  A man and a woman at the back of the bus tuck into pasties. The smell fills the bus. A young woman opposite us has her earphones from her phone plugged into her ears. The rest of us are the reluctant audience for that familiar repetitive tinny beat.

We get off at the 5th stop that the bus makes.

We flip a coin. Heads is always Left and Tails is always Right. This is to be done at every major junction.

1st toss takes us towards Embankment road, but very quickly we have another toss of the coin at the traffic lights with traffic flowing from the direction of Plymstock. Ruth is responsible for this action and manages to toss the coin into the road.

We spy a clothes airer in the lounge window of one of the terraced houses. Someone is drying their collection of thongs. The thongs have cartoon characters on them…cheeky. I am sure one of them is Sponge Bob Square Pants.

Another house has a large St. Georges  flag hanging from an upstairs window and resting on the roof of the ground floor bay window is a very large inflatable England football player (it being Euro 2012 at the moment).

We cross the road and spot a blue plaque on the row of terraced houses. No public right of way! So we take a closer look from behind the wall. The plaque reads National Lottery.

We then notice Westcountry Bathrooms on the opposite side of the road. 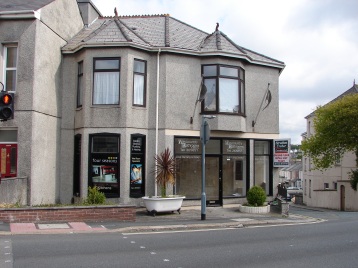 It has closed down and the lease is up for sale. Outside the showroom is a white enamel bath tub with cast iron feet.

It has a Yukka tree planted in it. 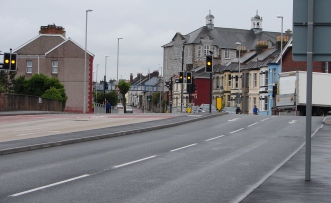 The site of the Western National Bus Depot. 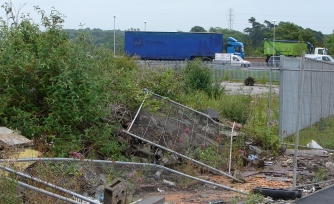 We continue our journey towards Ham Car Sales and yet another junction demanding the toss of a coin. Derek does this one and again we must turn left. This leads us in the direction us to Laira Bridge. We pass a bus stop. We realise that we should actually get on another bus. The next bus due is the number 5A at 1.05pm.

We have 5 minutes to wait. We watch a chap in in his High Viz clothes, measuring distances beneath a road sign .

At one point he has the tape measure laid out on the ground and he does a weird physical movement. He points the toe of his right foot toward the tape and leans back. He does this a couple of times. It is so odd that we copy him as we stand waiting in the bus shelter.

It started to drizzle with rain at this point. The bus was 5 minutes late and arrived at 1.10pm. There were 10 people sitting on the bus. The man opposite us, chubby and bespectacled, was reading a fantasy novel.

We get off at the 5th stop that the bus makes.

The 1st stop is outside The Range. The 2nd stop is opposite Morrisons Supermarket.

The 3rd stop is at Fairway Furniture on Billacombe Road. The 4th stop is outside Lidel at Plymstock Broadway. The 5th stop is a little further up the hill.

Very quickly we need to flick the coin once again to determine whether we continue up the hill or turn right…we turn right. We decide at this point not to flick the coin for minor roads on estates but to keep to the main arteries. Along this road we spot several things.

I liked this sign. It was quite high and I wonder whether it referred to the journey up?

Could this be a Worm Hole to another place or an old tin with some dog ends in the bottom?

We spotted an elderly lady, who looked quite spritely, dressed head to toe in co-ordinated green: Light green blouse; dark green cardigan; dark green skirt (just below the knee). There was something of tortoise about her; her face and neck were bony and a little pointy. These features were covered with slack wrinkly skin. We both mentioned we should have spoken to her. Too late after the event.

At the next junction the coin took us left and we headed off in the direction of Elburton Village. We were both thirsty and in need of the toilet. I did mention that there was another junction up ahead and it could easily mess us up.

At this point, having talked about how the bungalows had given way to much larger houses, we spied a sad silhouette of a couple sat eating their lunch at a dining room table. They were framed by a large window at the rear of their property.

A little further on and we caught a whiff of some blooms.

We finally approached the last junction before hitting Elburton. Ruth spotted wild strawberries growing on a wall. We both tried one – very sour. “Probably covered in rat piss”. We make an executive decision and continue on to the village. Outside the village hall there is a public convenience. We didn’t hesitate to use it. I was followed in by a bus driver who had at that moment drawn up outside. I was minding my own business, pissing, when he said “You should be able to bottle it really. Seems such a shame to waste it.” I said “I really wouldn’t want to drink that. Better out than in.” And we left the building. I met Ruth outside and my new friend got in his bus.

We made our way to the Lemon Tree Café and had Tea and Toasted Tea-cakes.

I spotted an interesting photograph of a 19th century Lifeboat man on the wall and I engaged the proprietor in a conversation about the subject, who is proudly showing off his medals for bravery. Our refreshment cost us £7.00 exactly.

We walk out onto the main road to catch a bus to return us to the City centre. According to the timetable in the bus shelter, we have a little bit of time to kill before the next one is due. We decide to walk to the next stop…that took us no time at all. So  we walk to the next stop, a little further on but we should reach it before our bus appears. We rest a moment and chat, laugh and joke. Then realise that the bus we require doesn’t actually come down this road. It would have turned off this road half a mile back, only to re-join Billacombe road at the next junction. We rush to the next stop and realise from the timetable that our bus is due to arrive at any moment. A young girl is sitting in the bus shelter. Ruth speaks to her and asks if she has been waiting long, but as she does so our bus appears from around the corner, Ruth hoots with surprised laughter. We all move to get on the vehicle. We are both laughing and the girl gives us a look as she climbs aboard our transport, as if we are disturbed or from another planet. We trundle back to the City centre, our adventure over.

Psychogeography arises as one of a set of ideas and practices developed by the International Lettristes (who later gave birth to the situationists), a study of how places affect the psychological states of those who pass through them. With a reciprocal meaning: that the places might be changed in order to change the experiences and mental states of their residents and visitors. This was part of a theory of radical activism for the transformation of cities.

In the UK the concept of psychogeography was detached from activist meaning and reconfigured as a literary practice in the work of writers like Iain Sinclair and also gathered some occult trappings during this time from Sinclair, Peter Ackroyd and others.

Mythogeography describes a way of thinking about and visiting places where multiple meanings have been squeezed into a single and restricted meaning (for example, heritage, tourist or leisure sites tend to be presented as just that, when they may also have been homes, jam factories, battlegrounds, lovers’ lanes, farms, cemeteries and madhouses). Mythogeography emphasises the multiple nature of places and suggests multiple ways of celebrating, expressing and weaving those places and their multiple meanings.

Mythogeography is influenced by, and draws on, psychogeography – seeking to reconnect with some of its original political edge as well as with its more recent additions. While engaging seriously with academic discourses in areas like geography, tourism studies and spatial theory, mythogeography also draws upon what Charles Fort might have described as ‘the procession of damned data’. So, occulted and anomalous narratives are among those available to mythogeography, not as ends in themselves, but as means and metaphors to explain, engage and disrupt.

We took our first steps via this starter kit

This entry was posted in Research. Bookmark the permalink.