Download the tracks to your phone or listen via this link

Located on Plymouth’s historic Hoe, in the shadow of The Citadel, lies a hidden secret: The Old Jewish Cemetery. Contained within high stone walls it has always remained hidden from public view. The only clue to its existence…an insignificant door.
In 2016 that door was opened and for the first time in its history the general public were given the opportunity to take a look inside. With the aid of funding from Vital Sparks and the Drake Foundation an audio trail was created in the garden cemetery, bringing to life the lives of those buried within this hidden gem.
In 1740 this plot was a family garden; today it is a calm oasis that hides a wealth of history and culture. 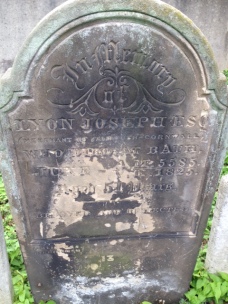 Thanks to Georgina Bellem and Jonathan Nicholson for sharing their family history with us and writing the biographies of their ancestors Rachel Bellem and Kitty Levi, buried in this ground. Also to Janet Henwood for sharing information she collected from the Plymouth Records office.

With special thanks to the custodian of the Plymouth Synagogue, Jerry Sibley, for helping every step of the way with information, contacts, tea and kosher cake.

This audio trail is funded by Vital Sparks and the Plymouth Drake Foundation.

The audios for Falmouth, Exeter and Plymouth are all on line to listen to, just CLICK HERE

Hidden Stories : Hidden Places grew out of our highly successful Plymouth Cemetery trail,  an artist led project researching and gathering stories from the people buried in overlooked and often unknown Jewish cemeteries in Exeter and Falmouth. The project culminated in a sharing of the stories for the Heritage Open days in 2017. We gave a presentation about the project in the Falmouth Poly;  in Exeter the stories were part of the open day in the Exeter synagogue and in Falmouth part of an audio trail in the Ponsharden Jewish and Dissenters Cemetery .

Plus click HERE for a film about Hidden Stories: Hidden Places

We used these publications for our research

Damnation Alley is an audio piece to be listened to whilst walking a route around the Barbican and is available to download onto an MP3 player or smartphone here or here.

This download guides the participant on a journey that begins and ends at the Barbican Theatre, Castle Street Plymouth. 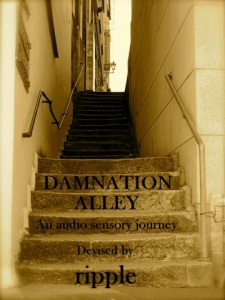 Damnation Alley was the nickname for Castle Street, a small street in the Barbican area of Plymouth that one time was known for its amount of ale houses and brothels. Inspired by an 1851 Government paper into the living conditions in Plymouth, the piece is part verbatum and part scripted. With thanks to Birlin publishers for the use of content from ‘Lost Plymouth’ by Felicity Goodall